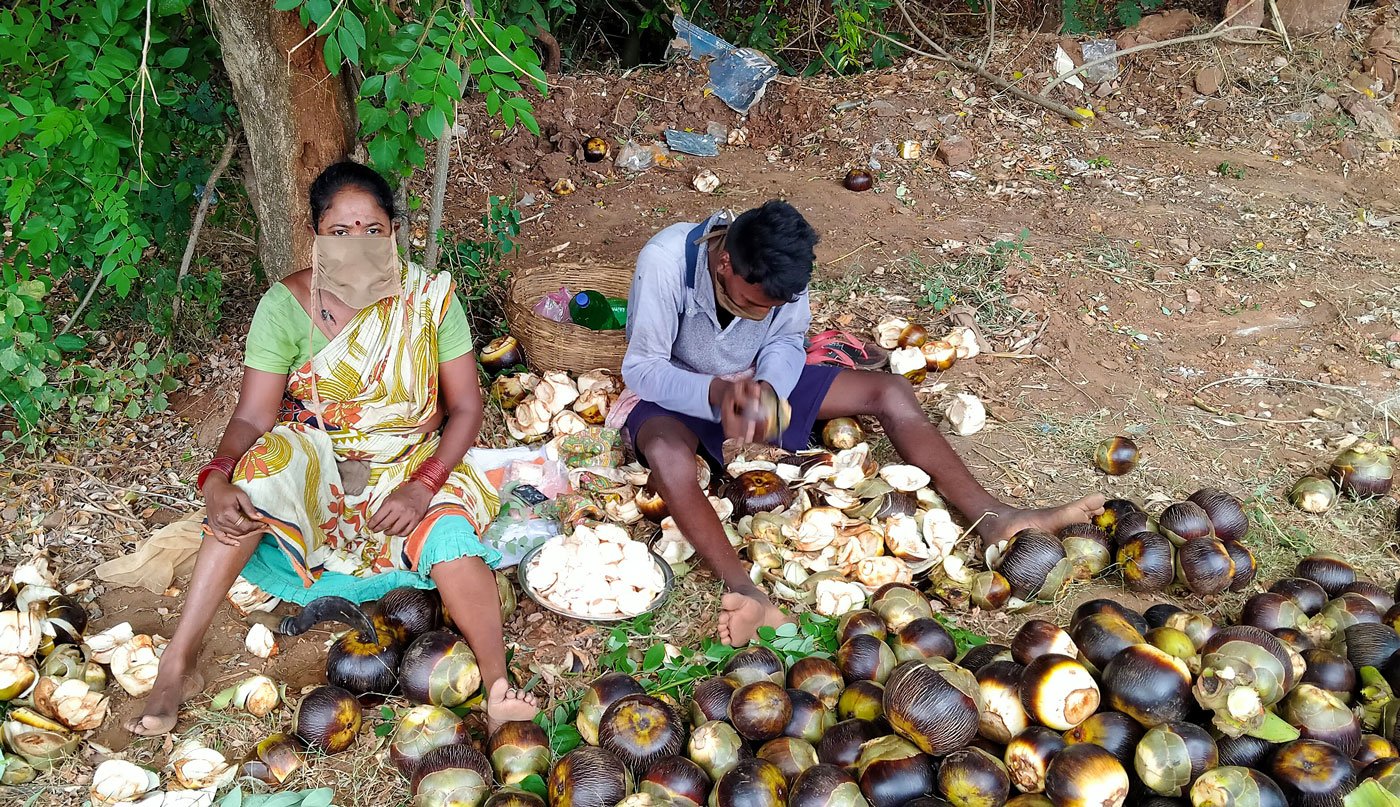 July 11, 2020
Visakhapatnam, Andhra Pradesh
Covid 19, Migrants, Musafir, Things We Do
With only 10-15 days of sales this year due to the lockdown, and fewer customers buying ice apples, vendors in Visakhapatnam have lost out on a chunk of their income from selling the popular summer fruit
Student reporter: Amrutha Kosuru

“I find it funny that people bargain,” said Kuppa Pappala Rao, a vendor of thaati munjalu, or palm fruit, in Visakhapatnam district of Andhra Pradesh. “Many come in big cars, wearing neat masks, requesting me to reduce the price of a dozen munjalu from Rs. 50 to Rs. 30-40,” he said, with a smile.

Pappala Rao wondered what people did with the Rs. 20 or so that they saved on the purchase. “I wonder if they realise that I need that money more then they ever will. Under normal circumstances, that would cover my bus ticket home.”

Like many other munjalu vendors, 48-year-old Pappala Rao – ‘protected’ by only a worn-out khaki-coloured cloth mask – was plying his trade along National Highway 16, near the Indira Gandhi Zoological Park in Visakhapatnam city on May 29. He has sold palm fruits for the past 21 years in the months of April and May.“Last year, we earned around Rs. 700-800 per day – munjalu has never disappointed us,” he said.

This year, however, munjalu vendors lost those critical weeks due to the Covid-19 lockdown. They began selling the fruit only in the last week of May. “We could neither sell the fruit nor work anywhere else,” said 37-year-old Kuppa Rama,  Pappala Rao’s wife, as she packed a dozen palm fruits for a customer. Rama and Pappala Rao travel together from their home in Anandapuram mandal of Visakhapatnam district to sell the munjalu in the city, 20 kilometres away.

“The sales haven’t been great this year. We can sell only 30-35 dozen munjalu  in a day,” Rama explained. “At the end of the day, after the transportation and food expenses, we are left with Rs. 200-300,” said Pappala Rao, remembering a time last year when he sold 46 dozen fruits in a day. This year, he and Rama could sell munjalu for only about 12 days, until June 16. With the season nearing an end, their sales dropped to roughly 20 dozen palm fruits a day in June.

In the months of April and May, thaati munjalu grow abundantly on palmyra palm trees (Borassus flabellifer), best known for the toddy made from their sweet sap. Toddy tappers like Pappala Rao scale the trees – 65 feet tall or more – to collect the sap and pick the munjalu during the season.

The palm fruit, also known as ice apple, closely resembles a coconut, and grows in bunches on the palmyra tree. Inside its oval-shaped, green-black husk are seeds that contain translucent, jelly-like sockets with watery fluid. These fleshy parts of the munjalu cool the body when consumed. So the fruit is in great demand during summers – even more than toddy – said Pappala Rao.

In the munjalu season, Pappala Rao climbs at least four trees, twice a day, to pick the fruits. “It’s time-consuming,” he said. “We set out to search for trees bearing palm fruits as early as 3 a.m.”

The early start allows him and Rama to make it to the city by about 9 a.m. “If I gather a lot, then we take an autorickshaw [that began plying after the lockdown was eased]. These days we pay Rs. 600 to travel from Anandapuram to Visakhapatnam and back. Else, we take the bus,” he said. The auto rates were cheaper last year, about Rs. 400-500, he said. Buses from Anandapuram to the city don’t ply frequently, and they were hardly around in the lockdown.

“In 3-4 days, the fruits become muduru [over-ripe],” said Rama. “And then we will be left without work and money again.” Their 19-year-old nephew Gorlu Ganesh helped the couple, who have no children, to sell the fruits this year.

Every year, from January to March, Pappala Rao also taps toddy from the palmyra trees. He and Rama then sell it for Rs. 10 or Rs. 20 per small and large glass near Kommadi junction in Visakhapatnam city. On some days they sell only 3-4 glasses, but sometimes  they can make Rs. 70 to Rs. 100 a day. Every month, they earn roughly Rs. 1,000 from the toddy. From July to December, they work as daily wage labourers on construction sites in the city.

The busy national highway in Visakhapatnam is an ideal spot for Pappala Rao and Rama to sell the palm fruits. They spend about 5-6 hours here and then head back home by 3 p.m.

A few feet away from Pappala Rao and Rama on the highway were N. Apparao, Guthala Raju and Gannemalla Surappadu – each sitting a couple of metres apart, as if following physical distancing norms. Each was dehusking the thaati kaaya (unhusked palm fruit) they had brought in an autorickshaw. Several vehicles passed by, but very few stopped to buy.

Each of the munjalu sellers was dehusking the thaati kaaya (palm fruit) they had brought in an autorickshaw. Several vehicles passed by, but very few stopped to buy

“We pooled in and brought this three years ago,” Surappadu said, pointing to their five-seater passenger autorickshaw. “It’s easier to bring the munjalu in this.” It was only their second day selling munjalu this season on May 29. “We divide the income equally. Yesterday, each of us got Rs. 300,” said Apparao.

Apparao, Raju and Surappadu live in the same locality in Anandapuram. They brought the auto with a bank loan. “Usually we don’t miss the monthly instalment [of Rs. 7,500], but we have not been able to pay the EMI for the last three months,” Surappadu said. “The bank keeps calling us and asking us to pay at least one month’s instalment. They don’t seem to understand that we have no source of income.”

When they aren’t selling palm fruits, the three of them take turns ferrying passengers in the auto, and divide those earnings too equally – Rs. 5,000-7,000 each in a month before the lockdown, after deducting their share of the loan instalment.

“Last year, we drove around many streets selling the palm fruits in our auto. We earned a lot,” Apparao said. “This year hasn’t been our best. But we hope that we survive and that it won’t be our last.”

Despite their present troubles, Surrappadu, who has been in the munjalu trade for 15 years, hopes to keep selling the fruit as long as he can. “I love cutting out munjalu. It gives a sort of peace,” he said, sitting on the ground and cutting open a palm fruit. “I feel like it’s more of an art or talent than a job.”

Some seven kilometres from the highway, in MVP Colony, 23-year-old Gandebula Eeswar Rao was driving his auto filled with palm fruits on May 29, along with R. Gowtham, his cousin. Eeswar is from Kolavanipalem village in Anandapuram mandal, and had travelled almost 30 kilometres to sell the fruits – starting this year, like other munjalu sellers, only by the last week of May.

Eeswar also worked as a toddy tapper for nearly a decade, from the age of 13. “In April last year, while climbing to collect toddy, a kondachiluva [Indian rock python] attacked me. I fell and hurt my stomach,” he said. His intestines were injured, and he had to undergo an operation that cost around Rs. 1 lakh.

“I didn’t climb palm trees again. I did other labour instead,” Eeswar said. He would clear rubble and overgrown plants from construction sites in Bheemunipatnam mandal and the Rushikonda area of Visakhapatnam for barely Rs. 70 a day. But with all those sites shut for weeks, he said, “This lockdown forced me to climb trees again, for munjalu.”

“Initially I was scared, but I wanted to help my family,” he explained. He climbed 6-7 trees thrice a day, while his father, 53-year-old Gandebula Ramana, a toddy tapper, climbed 3-4 trees. Eeswar’s brother works at construction sites, and his family includes his mother, a homemaker, and younger sister.

In January this year, the family managed to get a bank loan in Eeswar’s name to buy an autorickshaw, at a monthly instalment of Rs. 6,500 (for three and a half years). “I earned well in January and February by driving the auto – Rs. 3,000-4,000 a month. By March it was only about Rs. 1,500. Now it looks like I have to go back to toddy tapping and labour work,” said Eeswar, who hasn’t paid the EMI since April.

Until the Covid-19 pandemic unfolded, Eeswar’s family’s total monthly income varied between Rs. 7,000 and Rs. 9,000. “We try our best to make do with this much,” he said. When they fall short, they borrow from family members. They borrowed Rs. 10,000 from his uncle in March.

Eeswar sold munjalu for 15-16 days this year until June 18. “I thought it would be a good year. I thought I could send my sister back to school,” he said, about 15-year-old Gandebula Supraja, who had to discontinue schooling in 2019 due to the family’s financial troubles.

Amrutha Kosuru has a Bachelors in the Physical Sciences, and recently completed a Post-graduate Diploma in print journalism from the Asian College of Journalism, Chennai. She says, “I was always fond of palm fruit, but had no idea of the hardships a vendor goes through. Doing this story made me understand the risk they undergo to eat one square meal a day. I gained a lot in reporting and writing skills as well.”

This photo story was originally published on the PARI website on June 22, 2020.